Showing posts from March, 2020
Show all

Word, Excel, and RDP Crashing Due to Printer Issue

KB4541329 Appears to be the cause of this issue. Uninstalling it should permanently fix the issue. Just ran into an issue where a user kept getting a "COM Surrogate has stopped working" every time they tried to print from Windows Photo Viewer. They also kept running into an issue where Excel, Word, and RDP connections would crash when launched. Analyzing the crash dump that was generated (dllhost.exe) revealed the issue. The application was not able to find the default printer. Trying to set the default through Devices and Printers in control panel resulted in another crash. The fix was to run the command below: (New-Object -ComObject WScript.Network).SetDefaultPrinter('PRINTER NAME') The crashes went away once the default printer was set.
1 comment
Read more

- March 02, 2020
After a bad activation of BitLocker a Dell computer started giving a "no boot device found" error. I tried to re-image the computer but kept getting the error below: Windows Deployment Services Encountered an Error 0xc0000225 Resetting all BIOS settings and clearing the TPM didn't do anything. Eventually I found that Dell computers have an option to wipe all drives. After enabling the option and wiping the drive the laptop was able to boot into WDS again.
Post a Comment
Read more
More posts

Popular posts from this blog

Have an issue you can't solve? I offer consulting engagements and can be reached here: consulting[а 𝐭 ]amorales[․]org Last Updated 2020-01-03 After months of testing I recommend deploying FSLogix Profile Containers instead of User Profile Disks. You can find my guide here . Some of the items below apply to FSL Profile Containers.  User Profile Disks (UPDs) are great for load balanced RDS farms since it allows users to seamlessly roam from server to server. The goal of this article will be to configure the RDS and file servers in a way that maximizes performance and reduces the likelihood of UPD disconnects. I'll keep this updated any time I find new improvements. Use FSLogix Before you even consider deploying UPDs you need to be aware of  this limitation . On Server 2012 and 2016 (Server 2019 does not have this issue,  but it doesn't support Office ) the Windows Search index is machine wide. This means that when a UPD is disconnected the user's index data is d
Read more

Have an issue you can't solve? I offer consulting engagements and can be reached here: consulting[а 𝐭 ]amorales[․]org Updated 2020-04-27 This search portion of this guide does not apply to Server 2019 since it  should roam the Windows search out of the box . However, you can still configure FSLogix to store Office 365 data.  In my experience it is best to avoid mixing FSLogix and UPDs. My recommendation is to go with FSLogix Profiles and FSLogix ODFC. If you have dealt with User Profile Disks and Office 365 then you might know about the issues with search indexing. Every time a user signs out of the RDS their index is cleared and it has to be rebuilt the next time they sign in. The index will never fully rebuild once you have 5+ users on the server since it throttles itself. Recently I discovered FSLogix which resolves this issue with minimal configuration. FSLogix creates its own UPD that it uses to store Outlook, OneDrive, and search index data. It then tricks Windows in
Read more 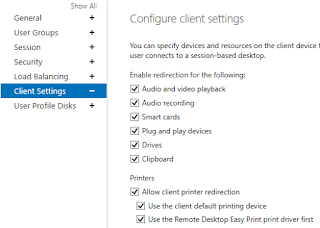 This will show you what you need to do in order to enable webcam access on an RDS server. NOTE: Using a webcam on RDS will result in significant CPU usage (30%+ in my case). You should recommend that users instead use their webcams from their local computers. The setup is actually easy but I ran into some issues that you'll see below. My configuration: Server 2016 RD gateway Server 2016 RD Session host Windows 10 1809 workstation VMware 5.5 hosting both VMs Built in laptop webcam and Logitech C270 webcam Enabling: If you are using an RD Gateway, make sure that redirection is enabled for the collection (not 100% sure this is required). No further gateway config is required. On the workstations, or on a GPO applied to workstations, enable the setting below: Computer Configuration/Administrative Templates/Windows Components/Remote Desktop Services/Remote Desktop Connection Client/RemoteFX USB Device Redirection/Allow RDP redirection of other supported RemoteFX
Read more